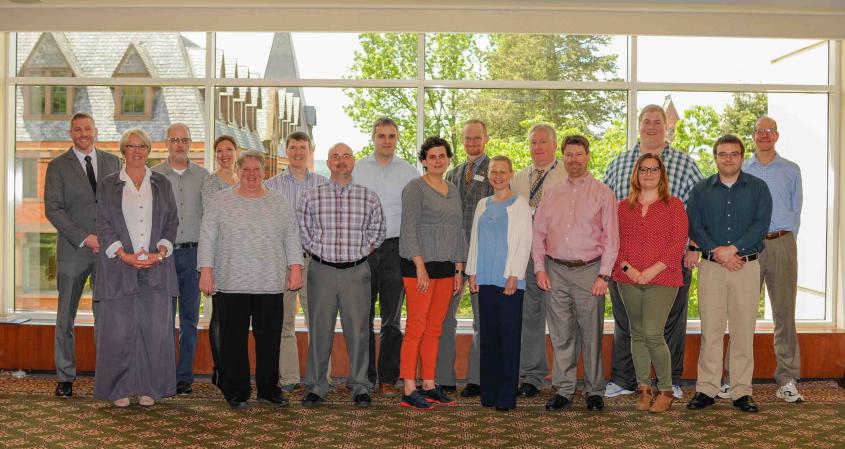 The fourth class of the IT Emerging Leaders Program (ITELP) graduated on June 7. Eighteen IT@Cornell staff members from across the university were recognized for their accomplishments in mastering the mindset of leadership. ITELP recognizes and supports the development and engagement of emerging IT leaders at Cornell. The nine-month program is geared toward highly-qualified individual contributors, technical leads, and frontline managers who may or may not have direct reports.

As a curriculum, ITELP provides an overview of leadership, and a focus on foundational skills such as leading without authority, building presence, and communicating effectively. Participants learn critical management toolbox skills, from meeting facilitation to coaching and process improvement. “We're all here because we are leaders in one form or fashion," said Helen Oland, studio operations manager in technology services at the Cornell College of Business. "In many ways, I've been looking forward to a formal leadership role in my career, and ITELP has really opened my eyes to the value of mentorship and the agency to lead from any position.”

Going strong since 2014, the program was introduced by Cornell Information Technologies (CIT) and campus sponsor and coordinator, Debra Howell, director of information technology for the Division of Infrastructure, Properties and Planning. Based on her overwhelmingly positive experience with the IT Leaders Program (ITLP) in 2013, Howell knew that ITELP would be well-suited to the university’s mission of excellence through learning and collaboration.

Reflecting on the opportunity, participants were appreciative of the immediate and lasting benefits of the program. “I was most impressed by the aspect of presence-building, recognizing how we are always 'on' in our professional lives," said Michael Radzik, a network administrator at the School of Industrial and Labor Relations. "As a result, I've been much more self-aware of my actions and body language, regardless of the setting. I'm considering more how these nonverbal cues can communicate the right message.”

In a show of appreciation, the graduating class surprised Howell with a special acknowledgment at the ceremony. Danica Fisher, communication specialist with CIT, delivered the honor, thanking Howell for her support of university leadership programs that effect positive change for employees, and for the entire campus community.